Today’s urban youth is engaged in a systematically chaotic but very convenient life, in the pursuit of a life with ease we don’t opt for the path of hardship. The desire for a material lifestyle comes at a cost of us distancing ourselves from our ‘spiritual existence’, we push ourselves away from socialism and the very roots of our modern existence. As Murlidhar Devidas Amte, commonly known as Baba Amte famously said: “I believe as a society we have to evolve, through experimentation, a system which combines the principles of individual freedom and common ownership.”; Opash Socio Commercials Pvt. Ltd. resonates with his thought process in organizing ‘Social Impact Tours’, We believe that a positive change in society at a larger scale is possible through a paradigm shift in society’s accumulative thinking & actions. And the most effective way to achieve this is by instilling socially responsible values in people at a very young age.

Our objective is to impart problem-solving skills in citizens, it is expected that people would observe the frugal yet innovative methods of problem-solving in the villages and would use it in their own lives. We want to make people, especially the youth responsible for society. This initiative aims at instilling social cognizance in the citizens and students so that the social betterment is looked at as one self’s equal responsibility rather than someone else’s.

With clear objectives and lots of expectations in mind, we organized an insightful tour of Anandwan, Hemalkasa, Somnath & Tadoba our first batch for this year which was conducting during 19th-24th November 2019.

We started our journey on 19th Nov from Pune to Wardha by bus with group of visitors.

On 20th Nov 2019 after reaching Wardha, we started our tour to Anandwan, which means ‘Forest of Joy’, it is the realization of one man’s dream– Baba Amte. We see the magnificent result of dedication and selfless service of Baba Amte and his team of volunteers in rehabilitating the people suffering from leprosy, people with physical disabilities and the ‘Madia-Gond’ tribe, in the process they set up a socially and ecologically conscious village which adopts social innovation for self-sustenance. Amte family and their loyal volunteers leave no stone unturned to bring the people suffering from leprosy and people with physical and mental disabilities back on their own feet, they have started many initiatives which would help the people mentally and monetarily. One such activity we were fortunate to witness was ‘Swaraanandwan’, where the cultural group raises funds for their community by organizing cultural performances, our group witnessed beautiful performances by the group, one of which included a duet performance by a blind man and a physically challenged women on Bollywood song ‘main agar kahoon’; their dedication and ease of performance even after their difficulties left us all in tears. We were fortunate to meet Dr. Bharti Amte, she shared her experience with Baba and described his Lion like personality with a soft spot with childlike enthusiasm, she talked about how the Amte family took onto them the responsibility of making the villages medically fit, and now that the senior Amte couple is getting old, they need young medical volunteers for their noble initiative, jokingly saying “we need to find another Doctor couple”.

What started as Baba Amte’s commitment has now grown three folds, where his children and grandchildren have selflessly dedicated their lives for this cause, what was initiated by elders of the family is being managed by the responsible youth of Amte family which is inspirational for today’s young generation. Surprisingly there is no temple or a physical worship place in the entire village because Baba believed that ‘Shram hi hein Shri Ram Hamara‘ which loosely translates to ‘our work is our god’. 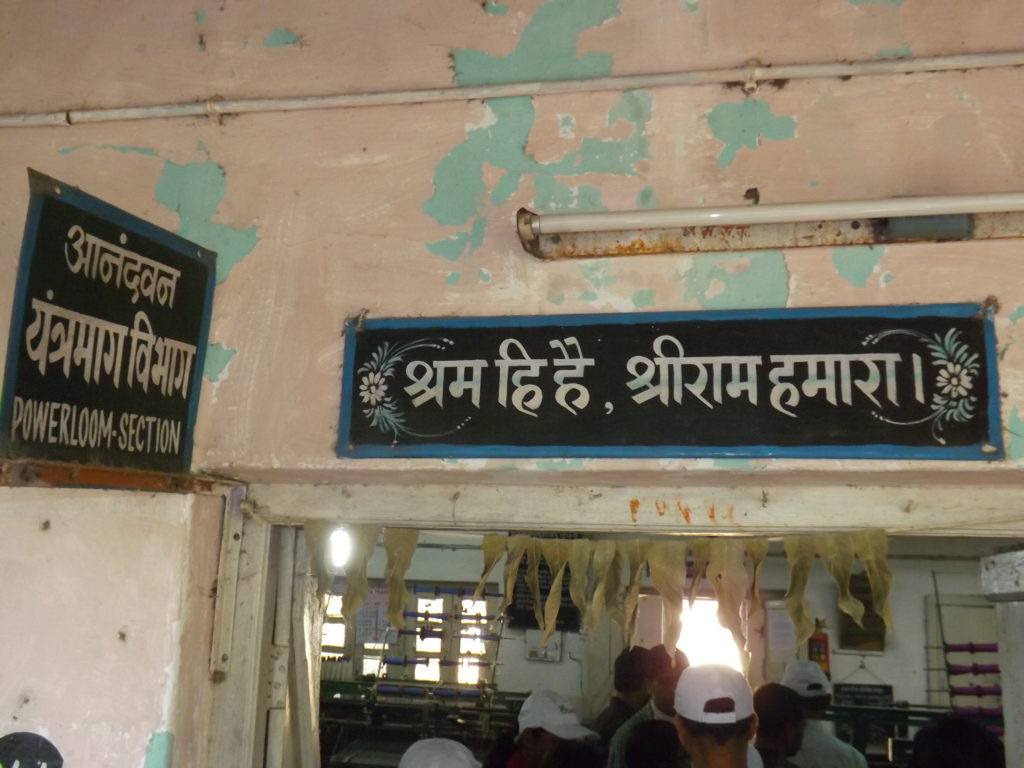 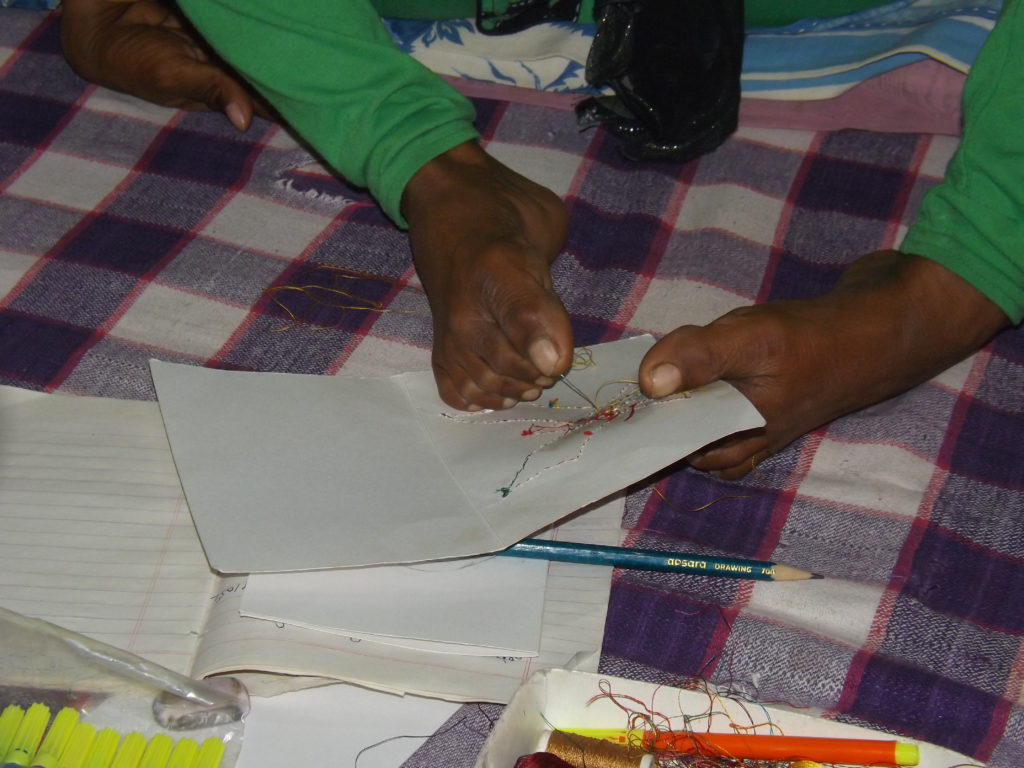 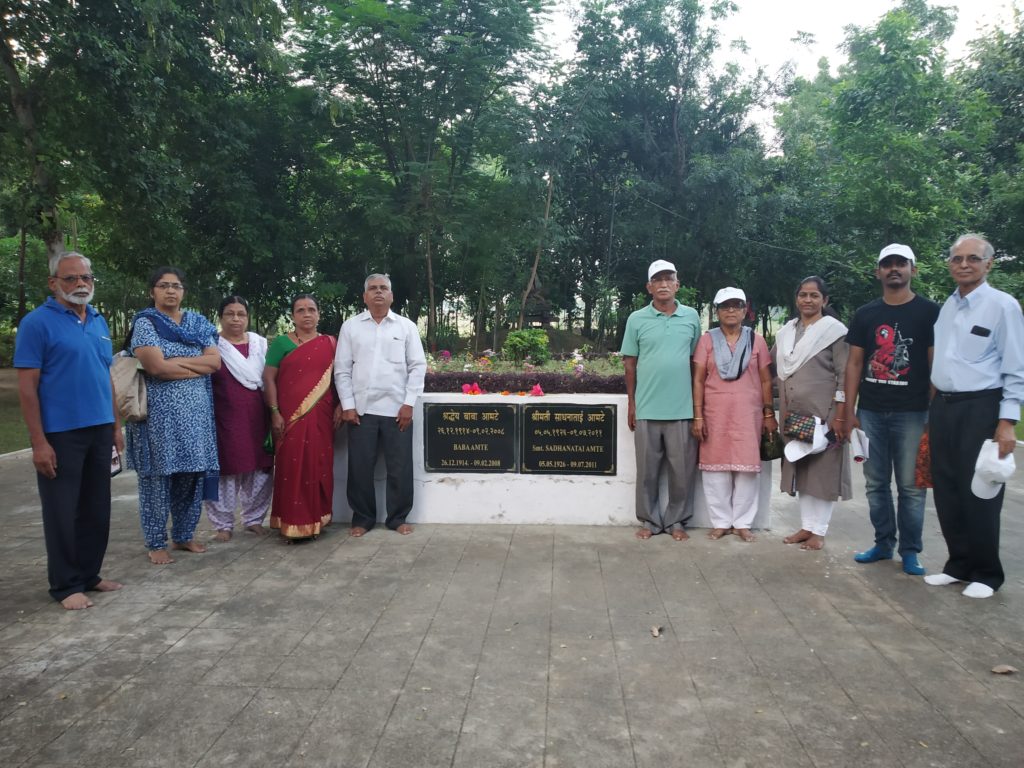 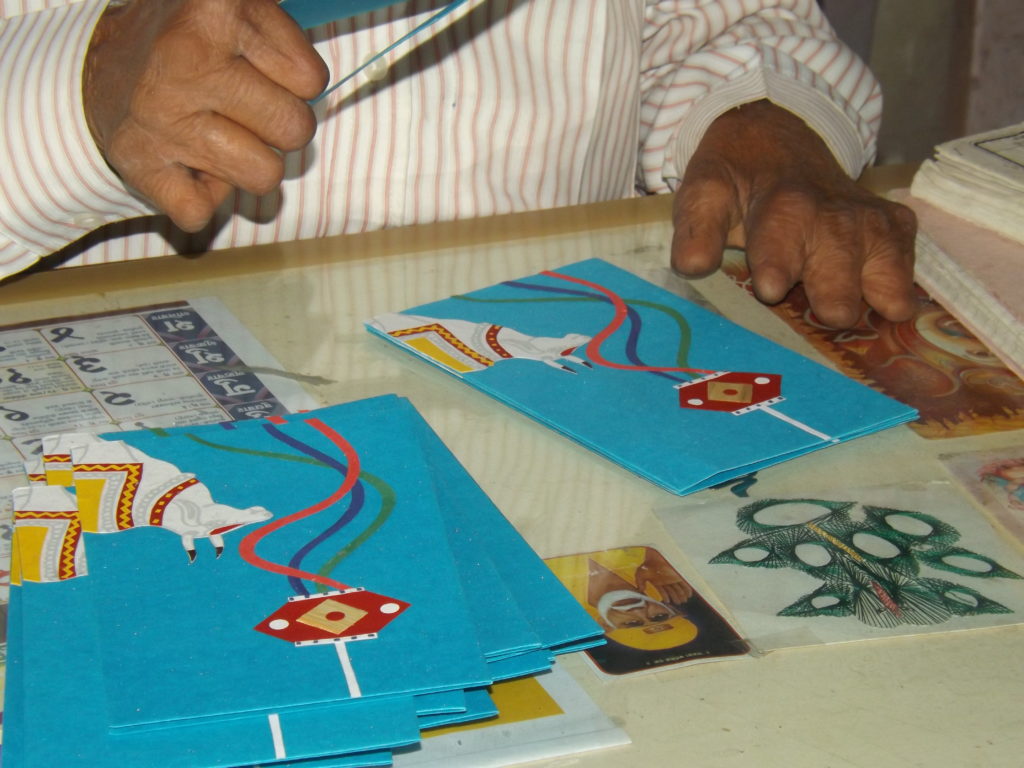 After having an eye-opening and inspirational trip through Anandwan, we headed towards Hemalkasa. It is a village located in Bhamaragadh taluka of Gadchiroli dist. This place is situated in a dense forest and inhabited by the ‘Madia-Gond’ tribal community of Gadchiroli district of Maharashtra. Baba was bothered by seeing the helpless life of the tribes indigenous to the area, he was concerned that the ‘Madia-Gond’ tribe lives in remote parts of the district, deep in the forests and have no access to healthcare and basic education. In the year 1973, Baba Amte started “Lok Biradari Prakalp,” which is overseen by his son and daughter-in-law – Dr. Prakash Amte and Dr. Mandakini Amte, the Amte family of volunteers who established hospitals, schools and also an animal orphanage in the village.

In Hemalkasa we met Sachin Mukkawar, he has been a central point of contact for all the visitors coming to the Lok Biradari Prakalp. His welcoming nature is remembered by all the visiting guests long after they are gone to their respective cities and villages. He narrated a story to us about when Baba Amte and his sons met the ‘Maida-Gond’ tribe for the first time and the tribe had mistaken them of being ‘revenue officers’, the revenue officers were notoriously infamous for extorting forest produce from the tribe and harassing female members of the tribe so the Madia people were at first skeptical about contacting Amte, but later when they understood that Baba was trying to help them they started to accept these new people in their lives.

Sachin described to us how the ‘Madia-Gond’ tribe was a woman-centric community and a very “practical” one as compared to urban society. The village is a testament to Dr. Prakash and Dr. Mandakini Amte’s hard work and dedication to social good. In Hemalkasa we also visited ‘Animal Ark’ which was set up by Dr. Prakash Amte for the animals which were orphaned by hunting practices of the Madia tribe, it is now home to many species of animals including leopards, hyenas, snakes, etc.

We were fortunate enough to meet Dr. Dighant Amte who is the grandson of Baba Amte, in Hemalkasa and got to know his perspective and his reason for dedicating his life to this social cause, it was a good opportunity for us to know his youthful perspective for joining his family’s path in helping the community. 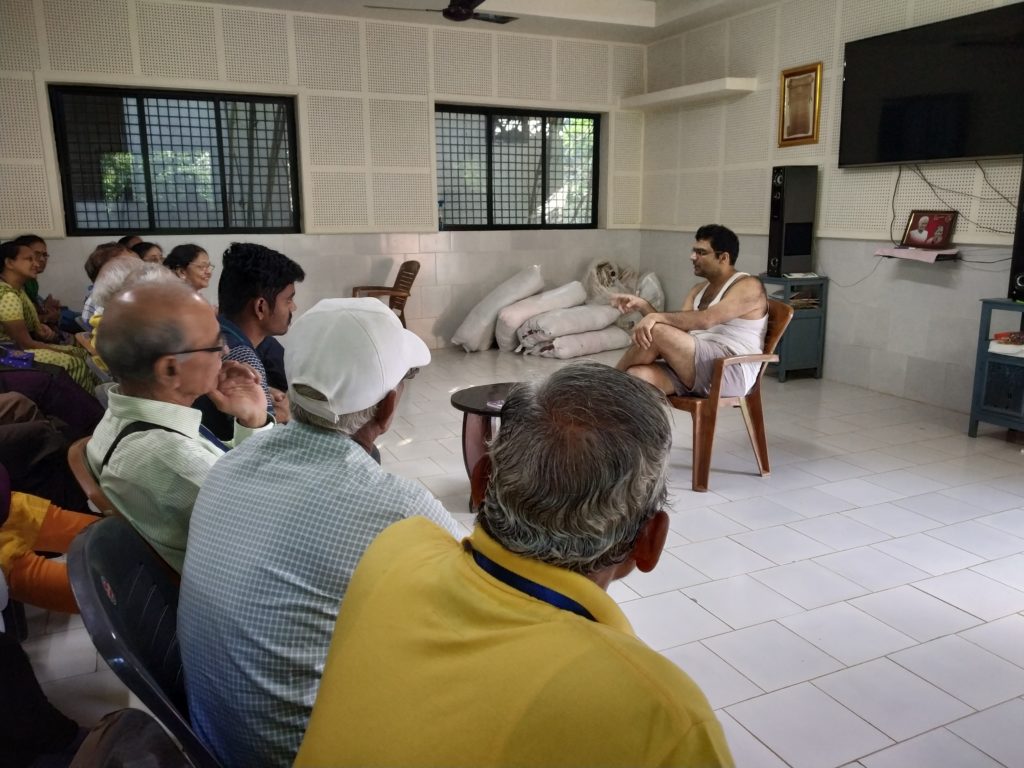 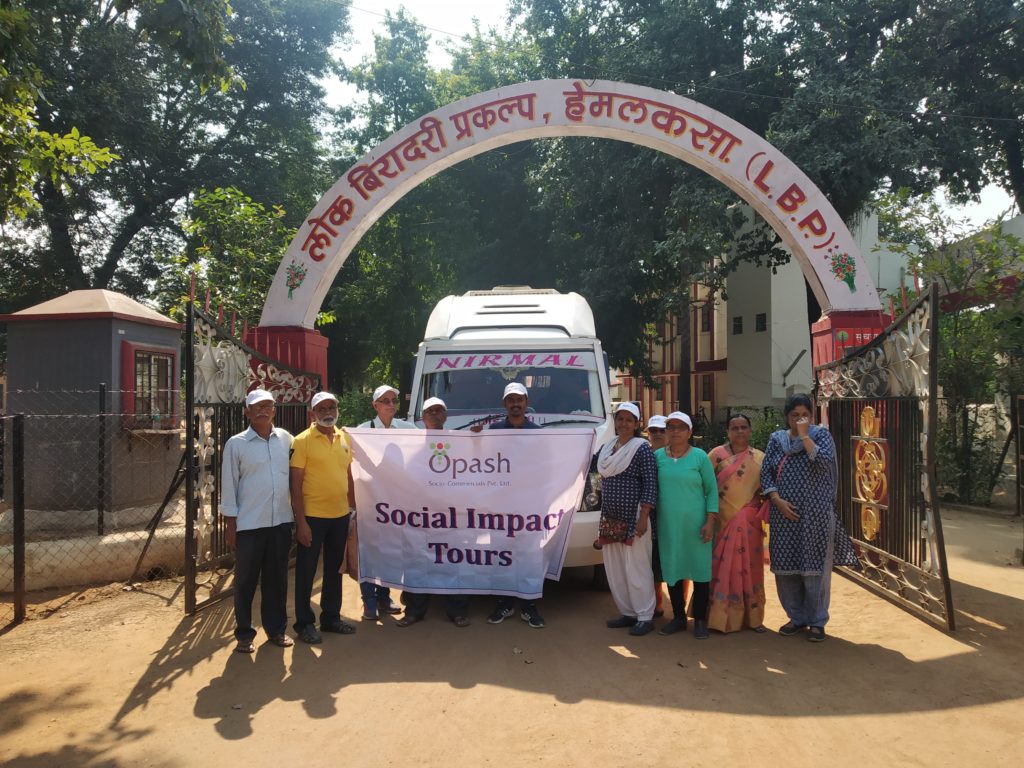 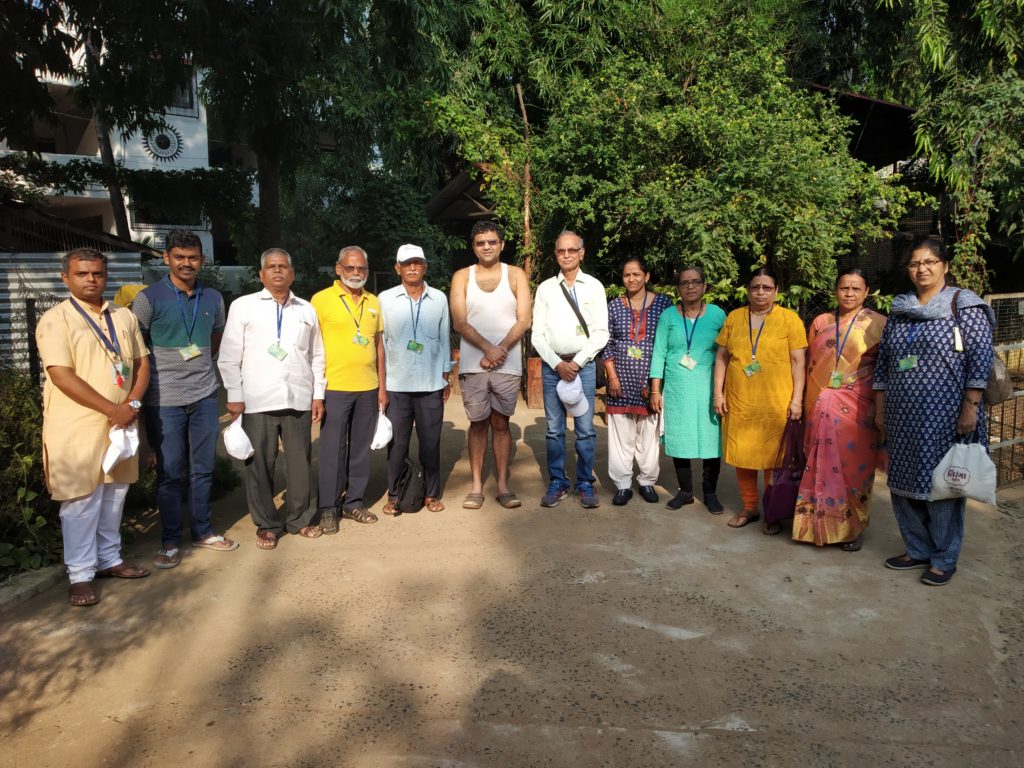 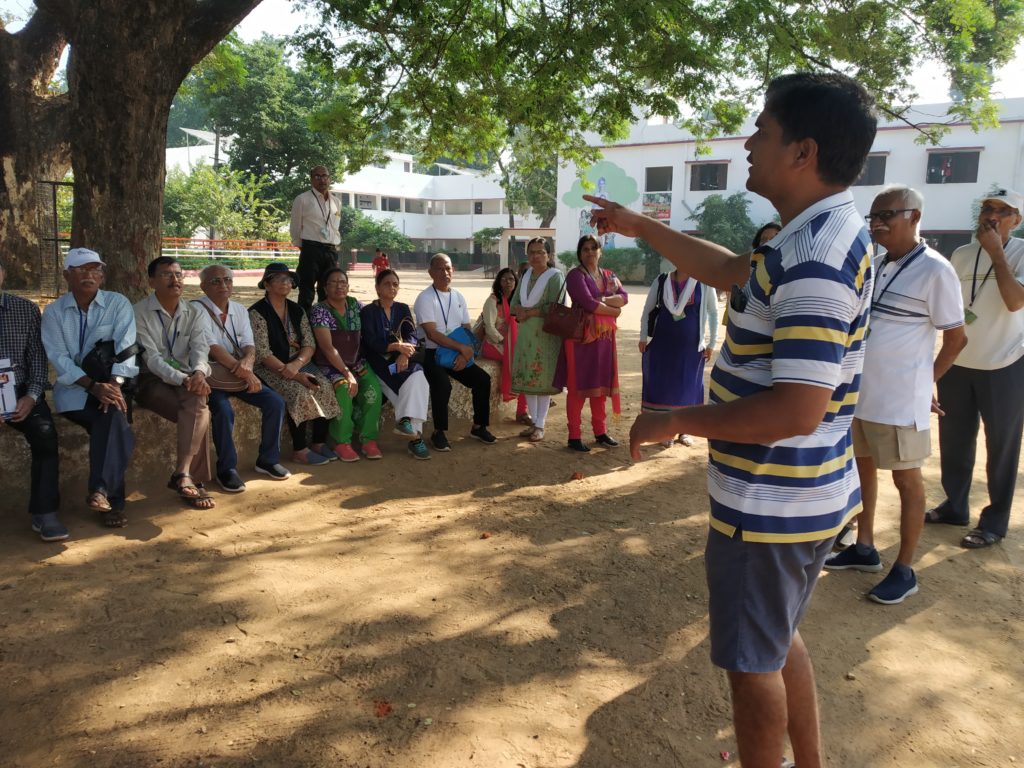 On 22nd Nov, we headed towards Somnath, when we hear word Somnath the temple town of Gujrat comes to our mind, but there is a small town of equal social significance, Baba Amte established Somnath in the year 1967 in the Tadoba buffer zone to rehabilitate cured leprosy patients and help them stand on their feet again. We met Hari Bhau Patil in Somnath, he was one of the first volunteers who had joined Baba in his social cause, he talked about the hardship faced by them in setting up the village.

He explained how hard it was for them to convince the neighboring villagers to set up a new village for leprosy patients, Baba had to strike a deal with the neighboring villagers and giveaway 650 acres of land. In the remaining 750 acres of land, which was with Somnath, Baba along with his volunteers of ‘Shram Dan’ had built 27 man-made lakes which in turn makes the land arable. Today the village is self-sufficient in terms of food production and has a surplus which is distributed to the neighboring villages. The success of this mission could be seen in the modern matrimonial traditions of the village, where perfectly fit girls of neighboring villages have started marrying cured leprosy patients of Somnath. The village has a common community kitchen which makes the entire day’s meal for the inhabitants. The village uses innovative and sustainable methods of farming which is fascinating to see especially for young people who have an interest in knowing about sustainable farming techniques. 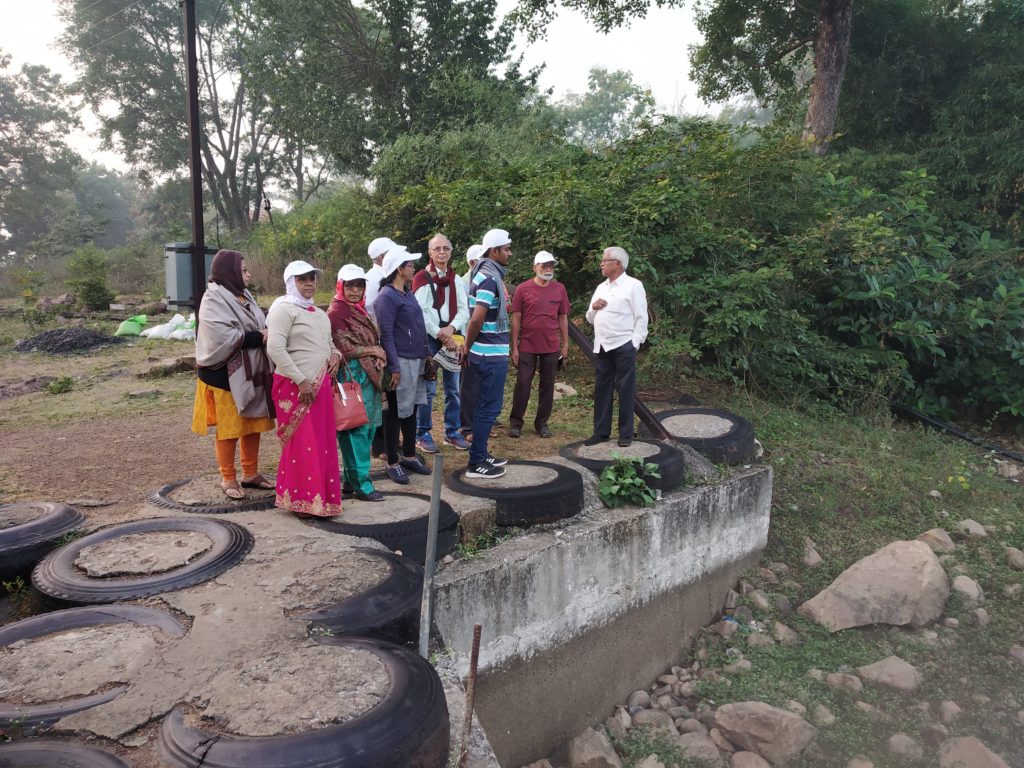 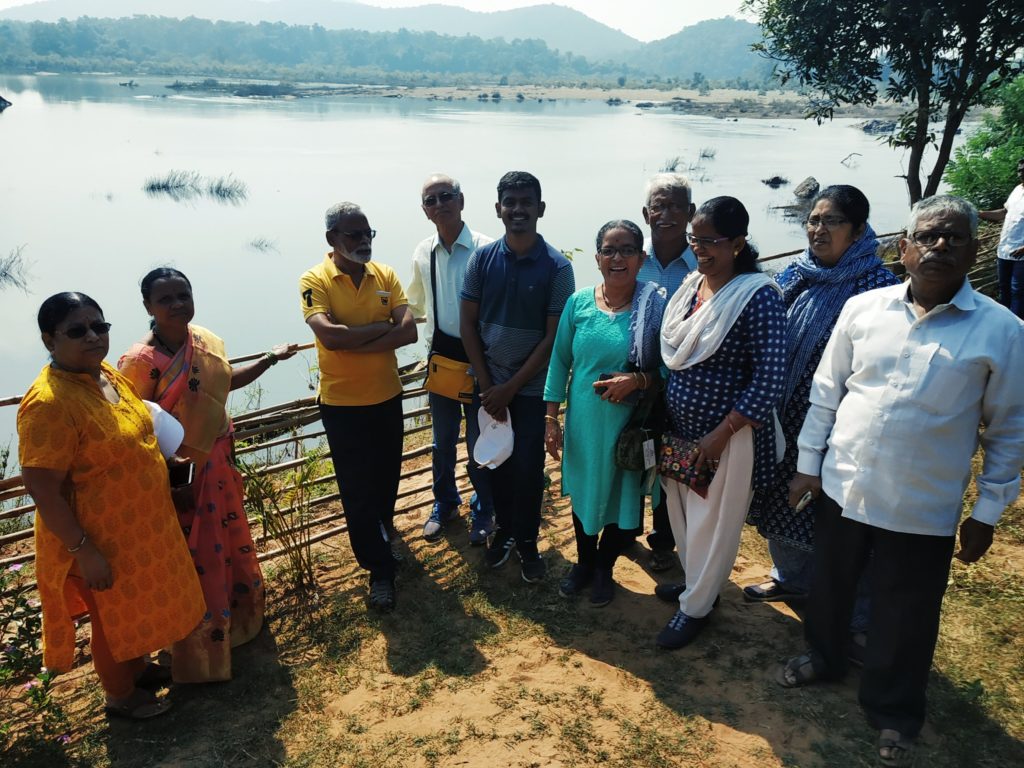 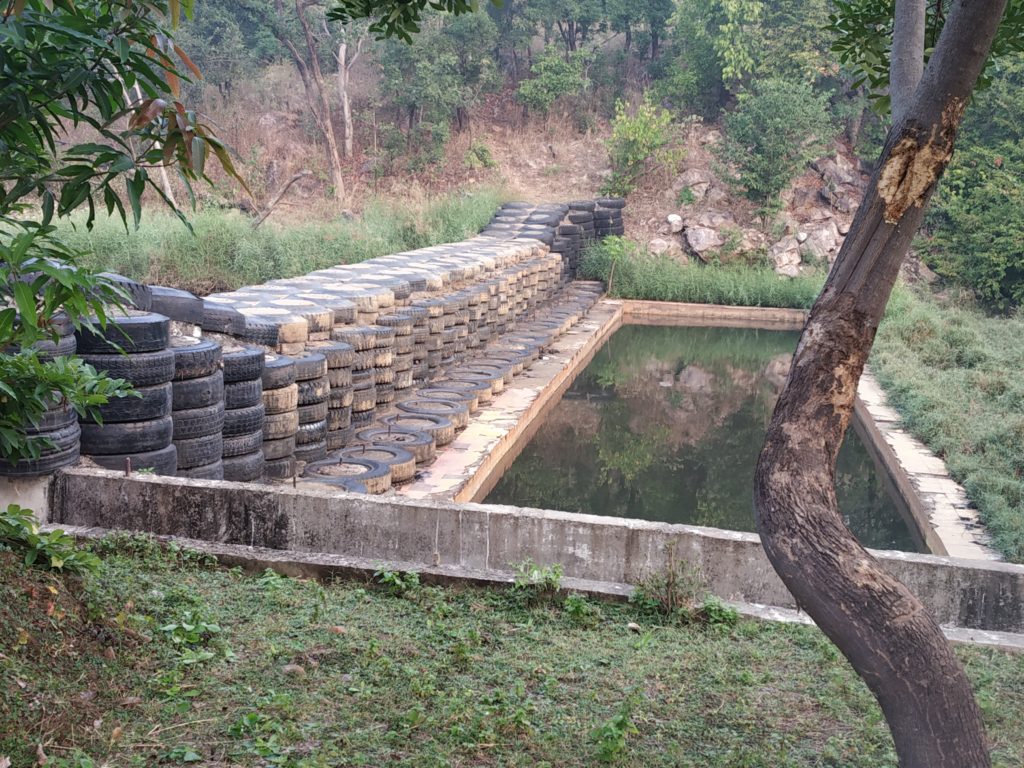 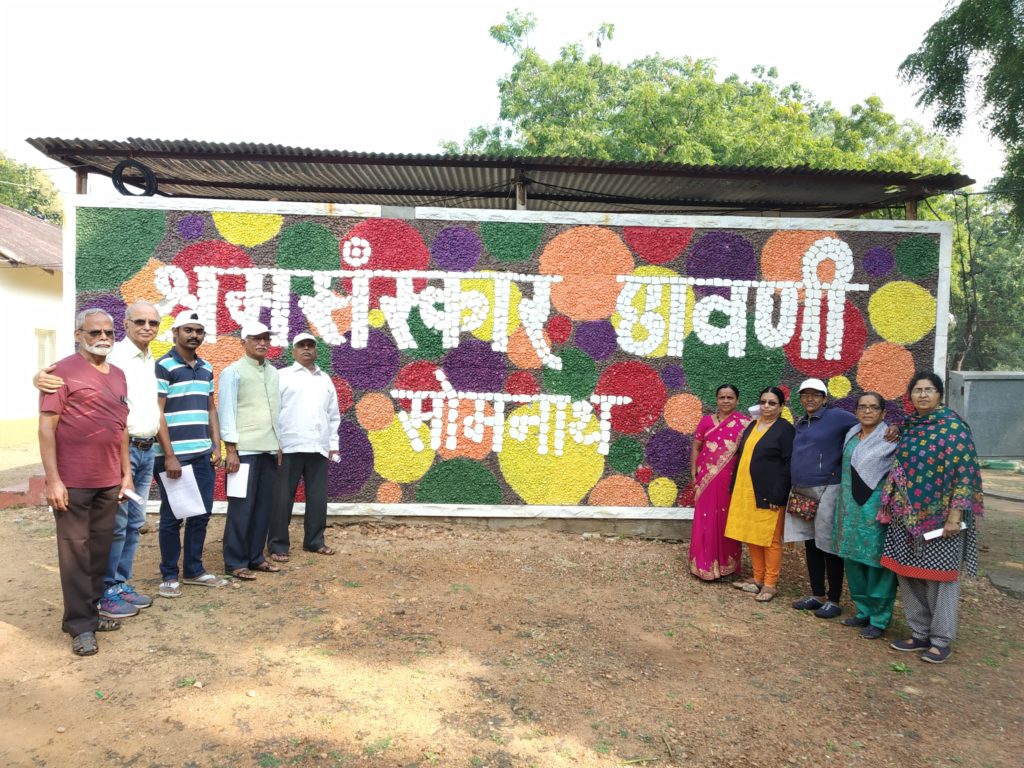 Our thirst for social participation had grown after visiting all the three villages and just to add to our satisfaction we gave a visit to Sevagram, which is located about 8 km from Wardha. Mahatma Gandhi set up his ashram on the outskirts of the village when barely 1,000 people lived there. Seth Jamnalal Bajaj of Wardha, a disciple of Mahatma Gandhi, made available to the ashram about 300 acres (1.2 km2) of land. Near the ashram, there is a museum where artifacts of India’s freedom struggle are preserved, Sevagram has been a vital place in India’s freedom struggle especially because the last few years of Mahatma’s life were spent in Sevagram Ashram.Just to add to the thrill we visited Tadoba which is home to the magnificent Bengal Tigers, there are more than 88 tigers in Tadoba which gives a good chance of spotting the majestic animal generally strolling or playing in their bastion in the lap of nature. 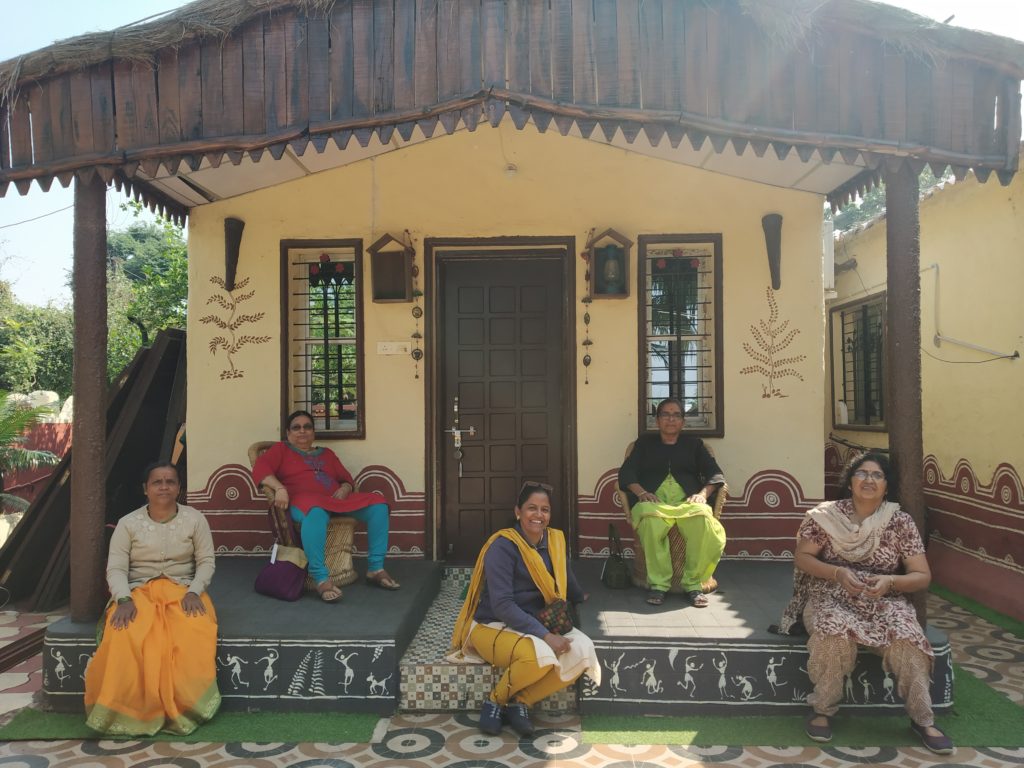 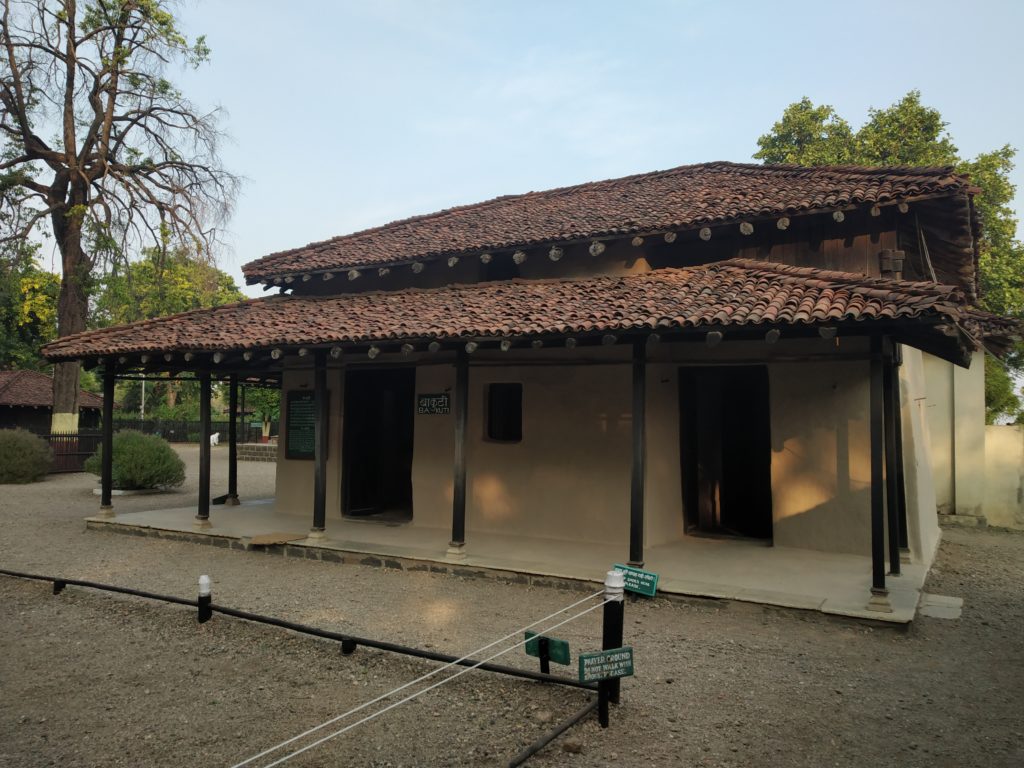 We had the privilege to host amazing people who even though being aged were very young at their heart, but we specifically focus our tours for the younger generations because we think that they are the future of our country and they should get the ground reality of the hardship some less fortunate people live in.

Through our Social Impact Tours, we try to inculcate the feeling of social responsibility in the Youth and other participants, we try to inspire them by showing live examples of the success of people’s collective participation. There is a growing need for people to participate in social events, we aim to facilitate the exchange of knowledge of model villages and social projects to citizens through well-defined and planned social tours motivating them to go “back to our roots” and preserve our rich culture and tradition and understanding the root cause of the social problems, which would encourage them to work towards social development. This helps them in being responsible citizens. The great feedback we got after our tours have motivated us and have valued our efforts, One such feedback comes from our senior members, he was with us during this trip, he profoundly said “that the tour was knowledgeable and I am inspired by such social practices, which are present across Maharashtra, to help rehabilitate and educate needy people is great and my relations with Opash Socio-Commercials is not ended with the end of this tour but will continue here on”, such valuable words inspire us to work harder to spread our ideas of social innovation and social participation.